Oil, gouache, pencil and collage on canvas over panel 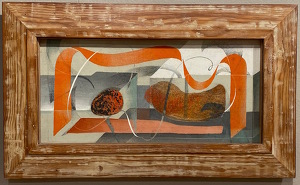 John Cecil Stephenson was one of the leading modernist artists working in Britain between the wars. Born in County Durham, he studied at Leeds College of Art, then the Royal College of Art and the Slade School in London. After the First World War, Stephenson moved into a studio at no. 6 The Mall, in Hampstead, London, where he would remain for the rest of his life.

Referred to as 'the English Bateau-Lavoir' by Jean Hélion, the Mall Studios became the focal point of British Modernism in the 1930s. The 'nest of gentle artists' who resided here included Henry Moore, Barbara Hepworth, and Ben Nicholson, as well as international figures such as Naum Gabo, Alexander Calder, and Piet Mondrian. Stephenson was the mainstay, and very much at the core of this group. He was also highly rated by these contemporaries. Upon entering the nest himself, Herbert Read was quick to note that Stephenson was 'one of the earliest artists in this country to develop a completely abstract style', while his work was included in the groundbreaking Circle show of 1937. 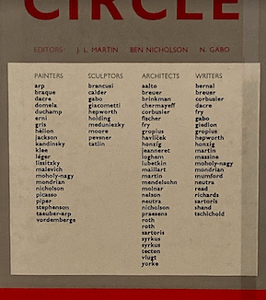