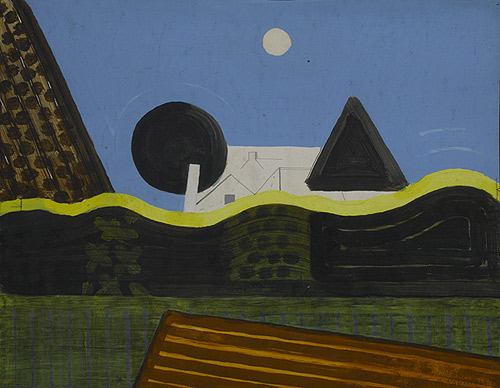 Literature: Kenneth Rowntree, A Centenary Exhibition, Moore-Gwyn Fine Art and Liss Llewellyn Fine Art, 2015, Cat. 68, p.115
In 1959, Rowntree became Professor of Fine Art at Durham University and it was there that he came into contact with Victor Pasmore, precipitating a further 90° turn in his work. During the 1960s and 1970s, he created a series of bright, hard-edged, geometric, non-figurative works, often incorporating lettering, either painted or collaged. He also delighted in recycling and reworking objets trouvés and bits of old packing cases, complete with stencilled names and addresses.
Despite this, he never totally relinquished his earlier Romantic vision, switching back, albeit in a more simplified vein, when the mood took him, as in such 1980s works as Findochty and Falling Rain with Raised Flag. The Naming of Parts, a beguilingly playful late landscape painted close to his Northumberland home at Acomb, is variously inscribed ‘Victoria Plum’, ‘Holly’, ‘Hawthorn’ and so on, as if it was an illustration to a young person’s manual for the identification of trees. Peyton Skipwith, Stylistic Switchbacks, Country Life, August 2015.