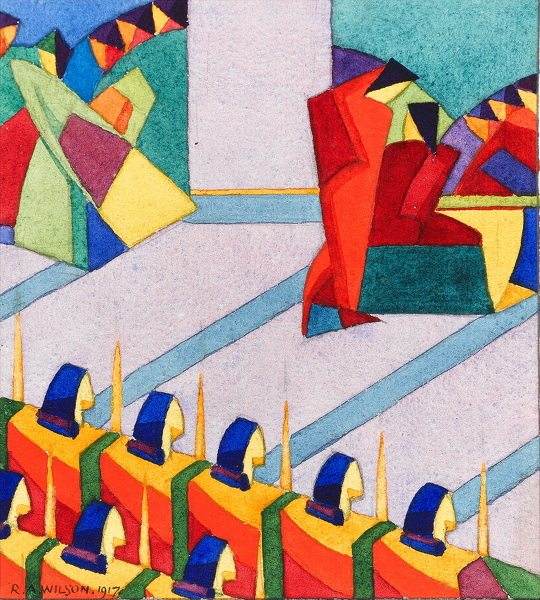 This picture has much in common with paintings of the same period by
C.R.W. Nevinson (see Returning to the Trenches, below), in its use of angles of colour to represent movement and mechanical efficiency. Nevinson argued that Futurist art was the only way to express the ‘brutality of the emotions seen and felt on the present battlefield of Europe’.

From 1912–16,Wilson trained in Paris, first at the Académie Julian and then at Tudor Hart’s Painting Academy. It was during this time thatWilson became
familiar with the work of, and associated with, other British artists studying in
Paris, such asWilliam Roberts, EdwardWadsworth and Nevinson.‘Wilson deals in colours at their fullest saturation, and his pictures are therefore exceedingly forcible and self-assertive, but whereas the French cubists deal largely in abstractions of Form,Wilson is concerned mainly with colour’ (James Wood, introduction to R.A. Wilson: Exhibition of Paintings and Colour Studies, London 1922).

From 1912 to 1916 Wilson trained in Paris, first at the Académie Julian as a pupil of Jean-Paul Laurens, and then at Tudor-Hart’s Painting Academy. It was during this period that Wilson became familiar with Cubism, and met and associated with other British artists studying in Paris such as William Roberts, EdwardWadsworth and C.R.W. Nevinson.

This work was probably exhibited at Wilson’s first one-man show, held at the Guild of Decorators’ Syndicate in May 1922 (possibly listed as The Ceremony, no. 38). Described by the artist as a exhibition of ‘paintings and colour studies’, the works consisted of ‘semi-abstract decorative subjects based on the analogy of colour and music’ (Memoirs of an Individualist, quoted in R.A. Wilson, London 2006, p. 5).

For a colour study in oil by Wilson see cat. 18.

We are grateful to Jonathan Dodd for assistance.