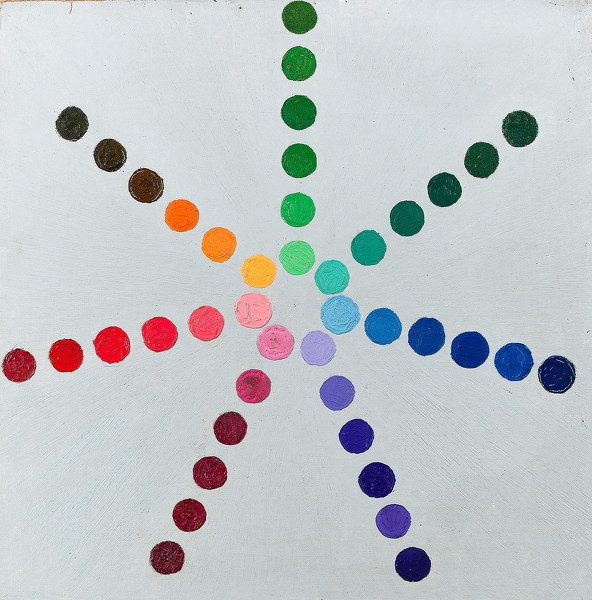 Hover over the painting to magnify (there may be an initial delay while the magnified image is loaded)
£9,500
Free shipping
Enquire
Add to cart

Multicoloured dots on a grey ground is one of a series of six such studies that Wood made, all with varying colours.

Framed in a white shadow box on hessian ground.

Throughout his artistic and literary career Jas Wood sought to define beauty. With fellow authors C. K Ogden and I. A. Richards he wrote The Foundation of Aesthetics (1922) and following this Colour Harmony, in which he explored colour as a language in its own right. He had a deep admiration for Kandinsky and at this time owned an important early work by the artist.

This painting was featured in Adrian Glew's article on the influence of Kandinsky on British Art:

"Whilst most of these artists moved on to different ends - Nevinson would launch the Futurist manifesto with Marinette several months later - the most specific, enduring, yet least known influence of Kandinsky on British artists at that time was on James Wood.  He had absorbed the lessons on colour theory, particularly those establishing correspondences between colour and musical tones, when studying at Percyval-Hart's art school in Paris in 1909, .... . These views were mirrored in Wood's own paintings, where the colour correspondences serve specific functions and where the image vibrates and resonates beyond the canvas."