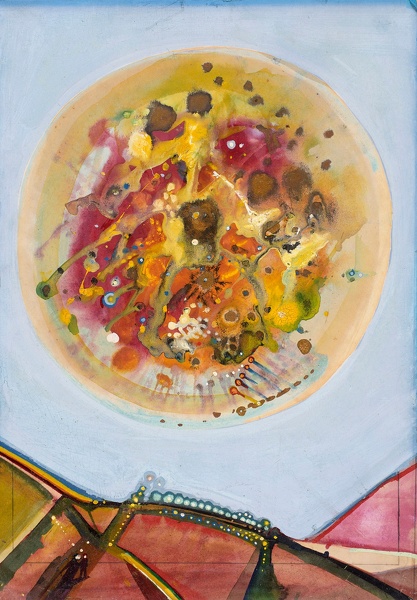 Literature; David Evans, Edited by Sacha Llewellyn & Paul Liss, published by Liss Llewellyn Fine Art, 2017. ISBN 978-0-9930884-6-9, cat 124, page 163.
Early in his career Evans showed photo-montages at fashionable London restaurants such as Gallery One and gained several commissions. These included a design for the Hollywood Room in the Observer Film Exhibition, 1956, and a mural for the Soup Kitchen, Knightsbridge.  Until recently Evans early work remained unrecorded - its rediscovery allows for a fuller understanding of his development as an artist.
The Cosmos series probably date to the late 1960's just before Evans left London  for East Anglia( 1969). Thematically they tie up with his passion for music - during this period Evans ran a a small classical music record shop, Record Roundabout, at 29 Brompton Road. Stylistically the Cosmo series bridge Evans earlier photo montage with the  the larger scale watercolours  of the 1970's for which he became well known through a series of Solo exhibitions at The Redfern Gallery, (from 1979-1988).