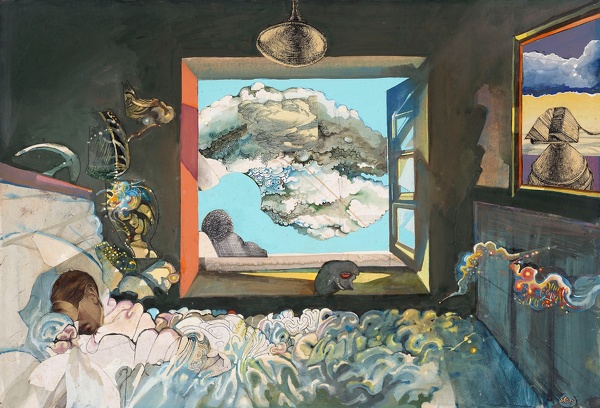 Evans' compositions belong to the Northern tradition of Hieronymus Bosch (1450-1516). Through heightened colour and narrative details his contemporary subjects resonate an underlying disquiet: I don't think anyone produces anything of value until it has actually got into the blood stream. In his love of story-telling, quirky humour and a delight in the ordinary, his pictures are also unequivocally British, especially in his commitment to producing watercolours intended for exhibition, rather than as studies for larger oil paintings.

Urban subjects similar to the repertoire of L.S Lowry (1887-1976), unfold against a backdrop of factories, concerts halls, sporting arenas,  beaches, cafeterias and bars, museum interiors and shopping centres. Bill-boards, traffic congestion and fast food are very much in evidence.   Night clubs are peopled predominantly by men (and the occasional drag-queen), a celebration of Evans’ homosexuality.   Evans made his living whilst in London running a small classical music record shop, Record Roundabout, at 291 Brompton Road.