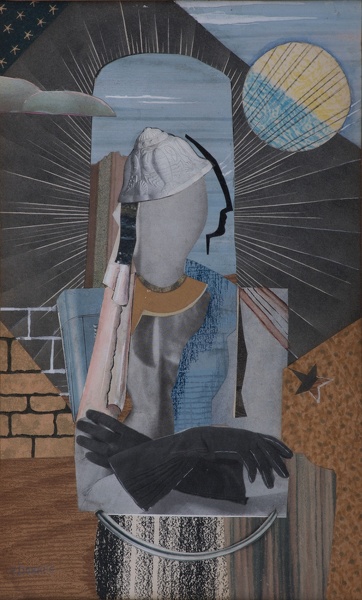 “She has given so much of herself to the world, lived so fiercely it is splendid...” So wrote fellow artist Dora Carrington of her friend Valentine Dobrée, the beautiful, aristocratic yet volatile daughter of an English diplomat who lived her life variously as novelist, poet and artist.

She was perhaps best known for her book Your Cuckoo Sings by Kind, published in 1927 and celebrated at the time for its bold treatment of sexuality, yet since the early 1920s had been producing (and exhibiting) artworks in differing styles created with a self-conscious knowledge of recent avant-garde movements and ideas. One such example is this work Black Gloves, a curious collage that hovers between figuration and abstraction and which both reveals and conceals.

Blocks of pattern form the background to the central section which resembles a fragmented figure out of which radiate numerous thin white lines. There is an energy to this figure. The folded arms of the gloves, the profile of the head outlined in black seem to tell us more than the decorative. Was this intended to be Dobrée’s veiled self-portrait – an image with which she wished to declare: “Here I am, liberated, sexualised and in control”? – one might wonder, as Dobrée enjoyed a lively love life at a time when relationships among the bohemia were fluid. Married in 1913 to the well-connected Bonamy Dobrée, she also had affairs with painter Mark Gertler, the Bloomsburyite Ralph Partridge and with the solider poet Richard Adlington. Lytton Strachey noticed that she was “perhaps a Saph...much attracted to [Dora Carrington]”. Dora, for her part, was deeply fond of Dobrée, “I admire the ways she has no preconceived conception of how a woman and an artist should live...”