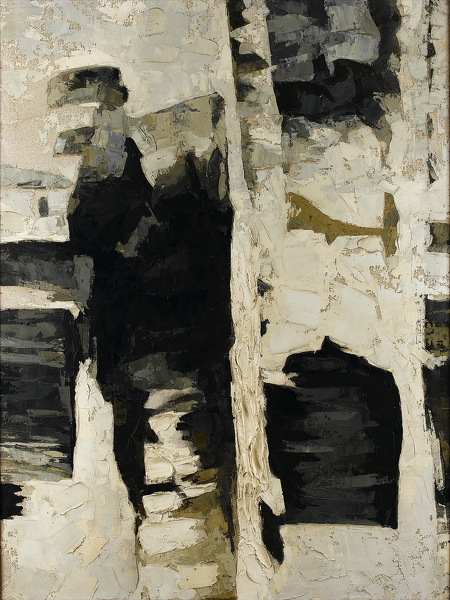 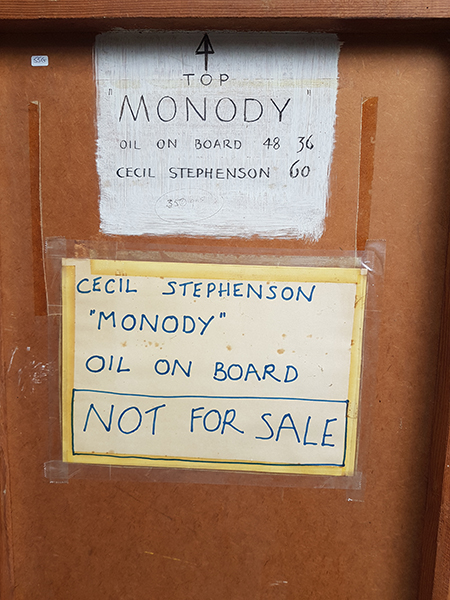 A Monody is an ode sung by a single actor in a Greek tragedy.

'The vicissitudes of the art world are such that it is possible for an artist of great talent to work for a lifetime in obscurity, and only towards the end of his career find the recognition that is due to him. He was one of the earliest artists in the country to develop a completely abstract style, a conscious craftsman ... he has created a world of visual delight that must at last be shared with a wide and appreciative public' (Herbert Read, introduction to Cecil Stephenson, exh. cat., Drian Gallery, London, 1960).

In April 1959 Stephenson met Halima Nalecz, the ebullient, Juno-esque owner of the recently opened Drian Gallery in London. She invited Stephenson to prepare for a one-man show (surprisingly his first), which took place in September 1960. He had about eighteen months to prepare for it. This resulted in a remarkable body of abstract work,most of which, according to their titles, are analogous to aspects of music. Some paintings were on a fairly modest scale (24× 18 in.) but at least ten were quite large (usually 48× 36 in.). Many refer back to small sketches in oil on paper that Stephenson had made during the Second World War, materials being in short supply. Some are fairly thinly painted in oil on paper; others are painted in heavy impasto on canvas and board. With the latter there is a dramatic gestural quality that shows an awareness of American Abstract Art, with which Stephenson was familiar through his activities as Chairman of the Hampstead Artists' Council. The smaller pictures were priced at around £50; the larger ones £100.

At the time of the exhibition, which was a critical if not a commercial success, Stephenson gave an interview (his last, as he was shortly to suffer a stroke, after which he was tragically incapacitated):

'Many misuse the word 'abstract'; Kandinsky explains it very well. Abstraction is a matter of condensing everything down to certain forms, such as the vertical (dynamic), the horizontal (static), and the diagonal somewhere between the two. The movement of a straight line runs across the canvas, but it can be broken up, like the teeth of a saw,to make quite a different effect.