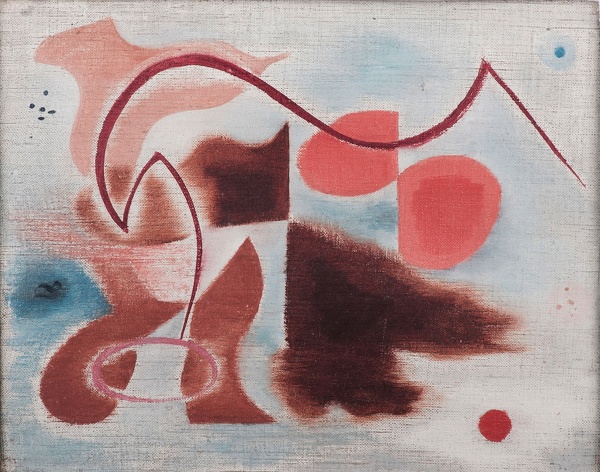 Signed, titled and dated on label to reverse

Born in Bristol, Marjorie Watson-Williams moved to Paris in 1926 and assumed a much more glamorous name, Paule Vézelay. She felt that her original name was too long and old-fashioned and not suited to the modernity of her work, and she loved the Romanesque abbey at Vézelay. But it also had the effect of deracinating her. When the Tate came to organise a ninetieth birthday tribute exhibition in 1983, Ronald Alley wrote in the catalogue that “there are many who either do not know her work or assume her to be a French artist who probably died some years ago”.

L’animal was painted in 1929, the year she got together with the Surrealist artist André Masson (they were engaged at one time, but she broke off the relationship). She was also friendly with Jean Arp and Sophie Tauber-Arp. Her work of the late 1920s is semi-automatic and abstract, featuring cursive linear motifs, but it subsequently became more geometrical and in 1934 she joined the international group Abstraction- Création.

She counts as one of the earliest and most imaginative British abstract painters; her interest in abstraction pre-dates that of Barbara Hepworth and Ben Nicholson and precedes the famous Unit One exhibition and book of 1934. Her incorporation of thread and wire into her work at that time are a major contribution to the art of the period.

In a BBC television interview in 1984 (Women of Our Century), Germaine Greer did her best to steer the artist towards certain answers (“In England you usually exhibited as M. Watson-Williams. Did you do this on purpose?”) but Vézelay looked puzzled by this line of questioning (“Well, it was my family name.”). She preferred to talk about her work.

Commentary by Patrick Elliott, Chief Curator at the Scottish National Gallery of Modern Art in Edinburgh.