Barbara Jones first attended art school in Croydon (1931–33) before winning a scholarship to the Royal College of Art (1933–36), where she met painter Cliff Barry whom she married in 1941.

A prolific and varied artist, during WWII she worked with the Pilgrim Trust on the Recording Britain series, making one of the largest contributions of the 63 artists taking part. She wrote and illustrated books on design history, many of which are today considered seminal, including The Unsophisticated Arts, 1951 and Design for Death, 1967.

In 1951, she organised the Black Eyes and Lemonade: Curating Popular Art exhibition held at the Whitechapel Gallery for the Festival of Britain. A fellow of the Society of Industrial Artists from the same year, she was made vice president in 1969. She was also a fellow of the Royal Anthropological Institute and a member of the Society of Authors. A retrospective exhibition of the contents of her studio was held at Katharine House Gallery, Marlborough, in 1999. 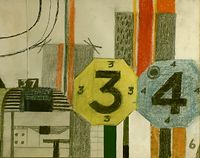