Painter, draughtsman, writer and aesthete, born in Southport, Lancashire. From 1908-11 he read history at Cambridge University, then in Paris, after studying etching, pursued painting with Percyval Tudor-Hart before going to Munich. During World War I he was in the army and Royal Flying Corps, later working on battleship camouflage. Among Wood's writings after World War I were The Foundations of Aesthetics, written with C. K. Ogden and I. A. Richards. He also wrote on colour harmony, a favourite topic, and in 1926 published New World Vistas, an autobiographical work. From the 1930s Wood became increasingly fascinated by Persian Art; he learn Persian and subsequently became art adviser to the Persian government. His own paintings were influenced by Kandinsky, and he showed at Leicester and Zwemmer Galleries in solo exhibitions. After 1955 he rarely exhibited, but painted several portraits of Cambridge Academics. Throughout the war years Wood lived in a remote cottage above Llantony, Monmouthshire. After the war he lived mainly in his Hampstead house, where his studio was situated, though spent some of his time in his wife’s house in rural Gloucestershire with occasional visits to Llantony. Wood was married to a painter, Elisabeth Robertson, who had previously been the wife of the artist and writer Humphrey Slater. 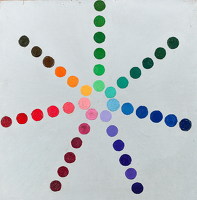 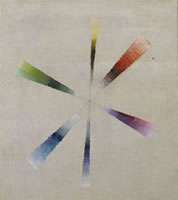 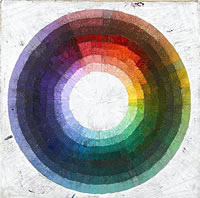 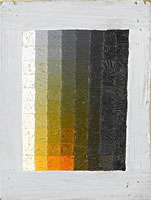