Painter in oil, tempera and watercolour, printmaker and teacher, horn in Monk Wearmouth, County Durharrr. He was apprenticed to a sign-writer until 21, studying part-time at Sunderland School of Art. A Government National Scholarship took him to the Royal College of Art where he won a scholarship. Then studied at AcadĂ©mie Julian, in Paris, and under Percyval Tudor-Hart, a major influence. Married the painter Stella Louise Wilson and was the father of the artist Arthur Wilson, Taught part-time in Surrey and London art schools. Showed RA, Paris Salon and SGA and had a series of solo exhibitions including Sunderland Art Gallery, notably in 1965. Wrote on tempera and the use of colour and in 1972 privately published his Memoirs of an Individualist. British Museum and Victoria & Albert Museum hold his work, which has an honest, art-and-crafts complexion. R A Wilson, as he liked to be known, lived in Bletchingley. Surrey. 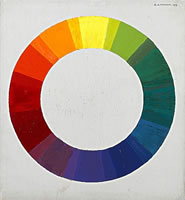 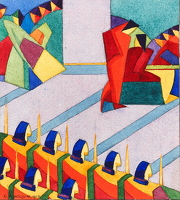