Abstract painter, born in London the daughter of a wholesale fruit merchant. She studied at St. Martin's School of Art, 1942-46, RA Schools, 1946-47, and the Accademia di Belli Arti in Rome, 1947-48. She first exhibited in 1946 at the RA and her first solo exhibition was held at Gimpel Fils, London in 1951 followed by many others at home and abroad. Blow also exhibited at the Venice Biennale and, in 1961, won second prize at the John Moores Liverpool Exhibition. She was elected an Associate of the RA, 1971, RA, 1978. Between 1957-58 she worked in Cornwall with artist Roger Hilton joining the Penwith Society in 1958 and from 1960 for fifteen years she taught at the RCA. More recently her work was been exhibited at KHG and many of her works were sold as limited edition prints through CCA Galleries. Her abstract paintings employ colour, gestural brush marks and texture and for a period experimented with collages, and the combination of polythene, bamboo and paint. In 1995 she was commissioned to create a glass screen for Heathrow Airport having relocated to St. Ives, Cornwall in 1994 due to escalating rental prices in London. Tate St. Ives held a solo exhibition in 2001 which was followed in 2005 by an 80th birthday retrospective exhibition at London’s Tate Gallery.

Blow is represented in the collections of the ACGB, Ben Uri, GAC, NCAS, New Hall College, Cambridge, Tate Gallery, Towner Art Gallery and the V&A and in many other public collections in Britain and abroad.
Bibliography: Sandra Blow by Jane Martineau. An exhibition catalogue for a retrospective exhibition held at the Royal Academy of Arts, London, 1994.
Recent Work. An exhibition catalogue, Andrew Dixon Gallery, London, 1991. ISBN 1873215258.
Sandra Blow by Michael Bird with a foreword by Norman Rosenthal. Published by Lund Humphries, London, 2005. ISBN 0853319219. 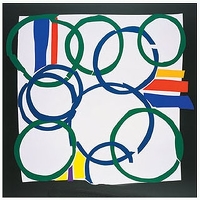